History of the Blogs Chapter 5: "A Collection of Literary Pieces"

Rocky Chua 12:57 PM Comment
After the birth of The Rock Land and Rhythm of the Rock, another site was born! This is the blog site intended or serves only as the storage of all the Rocky's literary pieces!

And it was named as..."The Rock's Literary Collection"! This is its story... 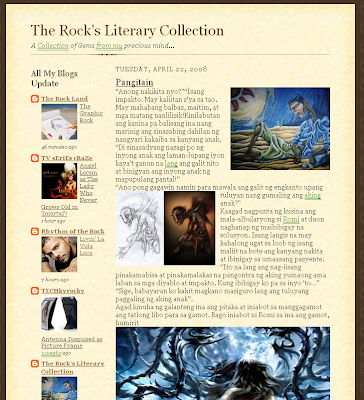 Born on April 22, 2008 having the URL of rocklits.blogspot.com, The Rock's Literary Collection became available in the internet providing the readers with three of Rocky's top literary article. It has the subtitle description known as "A Collection of Gems from my precious mind..."!

The Logo of the Site Then and Now!
The URL rocklits again came from two words. It is "rocky" and "literary". Merging them formed "rocklits".

The very first post on this site was the Rocky's poem called "Rocky"!

But did you know that it only contains three poss?! These were the following: 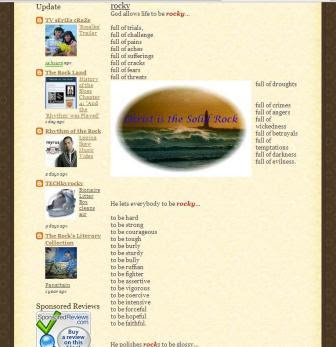 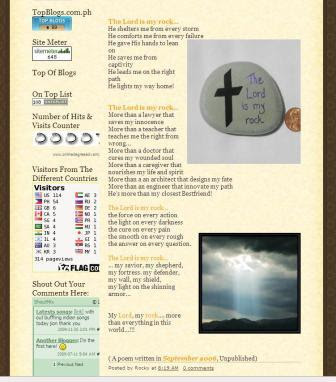 "The Lord is My Rock" 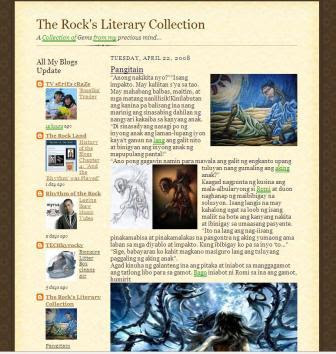 "Pangitain"
After April 22, 2008, no other posts were published! Yup, these three and only these three!

The mere reason for this was that, this site is only for storage! It just housed my literary articles published and unpublished in College.

Of course these three articles were not my only literary articles in college. It just happened that these three have a soft copy. Since they have soft copies, it was easier for me to publish or post them in the internet! My other literary articles were already printed through hard copies! I don't anymore have their soft copies! It will take time to re-type them! But don't worry, maybe some other times you may see them here! =)

So, revisit the collection of gems from my precious mind through The Rock's Literary Collection!

See you again on the next exciting chapters of the history of my blogs...!!! c",)

Rhythm of the Rock, Rockz Cafe, and TV Series Craze Are Now in Facebook's Fan Page

Yup, your top three favorite and most popular blog sites namely Rhythm of the Rock, Rockz Cafe, and TV Series Craze were now in Facebook! They already have a Fan Page in Facebook, the world's No. 1 Social networking Site!
Are you already a fan of them?! Or that you already have them in your Pages' List in your profile?
Well if not, kindly visit each sites by clicking the images below and press Become A Fan in the square box with a Facebook logo in the upper-right corner of each sites! 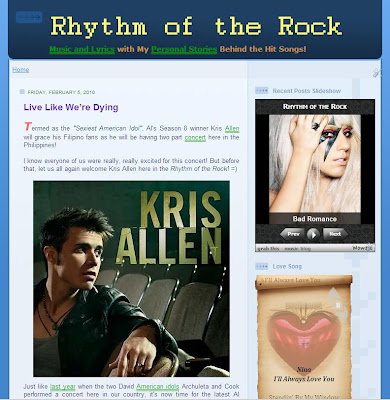 Rhythm of the Rock 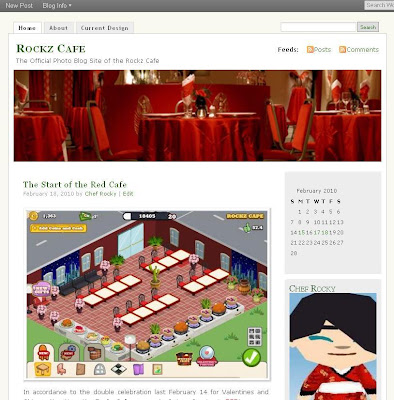 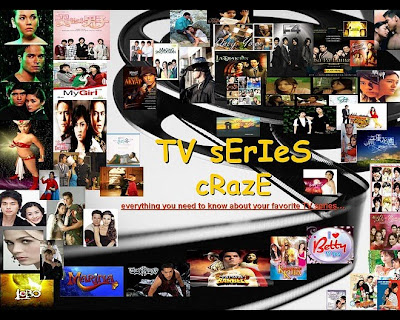 Or, if you're already logged-in in your Facebook's account, kindly type each site's name (e.g. Rhythm of the Rock) in the Facebook's Search box then choose the sites you wanna join!

Actually I've just created their pages last Sunday of this week, and I'm so very glad that more and more friends as well as other people were becoming a fan! Thank you all! =)

Therefore, with the great success of these pages, I am now formally launching their Facebook's Fan Pages here in their mother site The Rock Land! So consider this post as a grand launching of Rhythm of the Rock, Rockz Cafe, and TV Series Craze' Fan Pages in Facebook!

Oops, don't worry 'coz upcoming are the fan pages of this site The Rock Land as well as my other more blogs like TECHkyrocky and The Rock's Literary Collection!