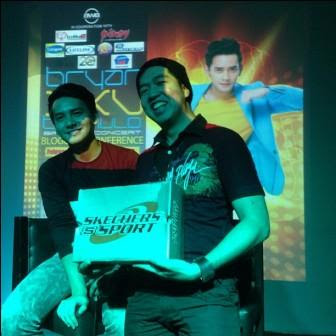 It was the eve of Chinese New Year when we had a Bloggers' Night with the "Teleserye Theme Song Prince," Bryan Termulo in Insomia Bar, Centris Walk, Quezon City, February 9, 2013. And yes, that night proved to be a lucky night for me. I didn't only got a chance to talk and mingle again with Bryan for the fourth time, I even won a grand prize of Sketchers Sports Shoes!


Yup the color red once more proved to be my lucky color. Remember last year, I was also wearing red when I passed the International Software Testing Qualification Board (ISTQB)? And that repeated on a Saturday night with Bryan! And it was so surprising seeing Bryan also wearing red. "Naging termo pa kami!"


I wore red that time for my two consecutive events following the tradition of a Chinese New Year. Though Feng Sui said that green is a lucky color for the Year of the Water Snake, I still preferred red since this is also my favorite color!


During the Bloggers' Conference for Bryan Termulo's 25TH Birthday Concert, exciting prizes were given away to the bloggers via raffle. Five bloggers won Facial GCs worth 1,000K and two bloggers won the two major prizes, the Sketchers Shoes. And I'm one of the lucky two!

The Sketchers Shoes worth Php3,695. I was so lucky that night having that cool white sports shoes. That was a perfect treat from Bryan!

Bryan is celebrating his 25TH birthday hence his concert is dubbed as "Bryan XXV Birthday Concert." It will be held on Music Museum this coming March 9, 2013.

I'll share more of the stories about our event with Bryan in my next succeeding posts. By now, I just want to share with you my happiness and my another lucky moment.  (RCB)

Rocky Chua 8:05 PM Comment
We are Team Red! It's such a coincidence that the four of us were all wearing red yesterday, during the day that we took the ISTQB Certification exam.

Me and my three teammates took together the said examination on the same batch. We were surprised seeing each other wearing the same color - red!

Even the wall in the examination room is also painted in red! That's why right after the exam and right after we passed, we had our souvenir photos.

Here is our picture-taking lucky moment right after we passed the International Software Testing Board: 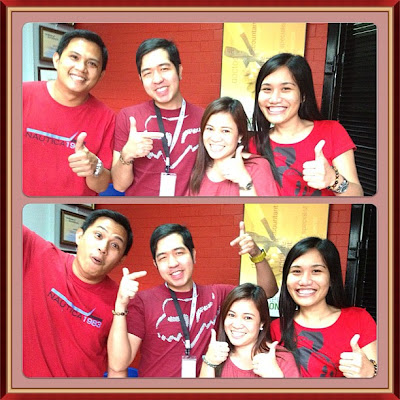 They say that red is a lucky color. And that proves to be true based our own experience!

Actually red is my favorite color since birth! I love the color of red. It symbolizes different things such as love, courage, life, and of course lucky charm! The last term is true in our case! Thanks God!

It also seems that we attended a red carpet premiere night because of our common red attire. Remember, most of the premiere nights I have already attended have actors wearing red?! Nice!

Now the four of us wearing red in the picture were all Certified Software Engineers! Thank you Lord for your blessings! c",)
Older Posts Home
Subscribe to: Posts (Atom)