Rocky Chua 10:27 AM Comment
See how these cute little creatures guarded my laptop. They are my official laptop guards: 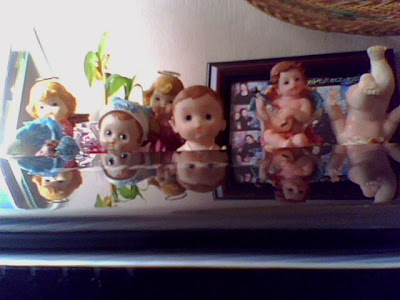 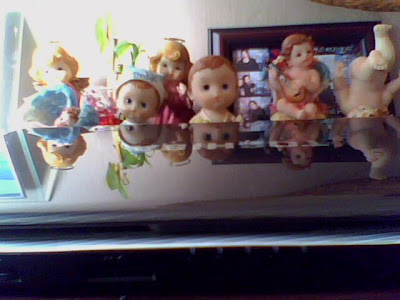 I know I already introduced them to you collectively in my previous post. Now, I will let you see how they guarded my favorite and priced belonging!

At first, this place is plain and simple. But after the arrival of these cute little things, my home's workplace is now very attractive, relaxing, and stress-free!

Actually, this is the first design of my mini-office. Today, it is more attractive since I already bought an ornament for it! Don't worry, I will also share it with you on my next post.

My laptop guards comprised of two cute little babies and different cute angels. They were figurines that truly give fun and drive boredom in my mini-world! Actually the team of these cute little things already grows. Two cute puppies and a Picachu added to their group! Nice!

Next time, I will introduce them to you one by one! So, feel the fun, happiness, and attraction they give to my favorite home's workplace! c",) 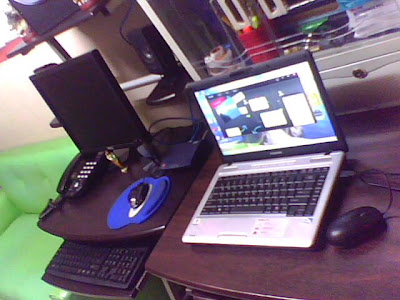 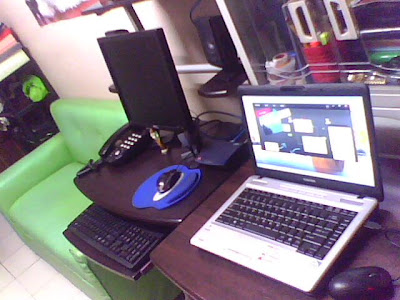 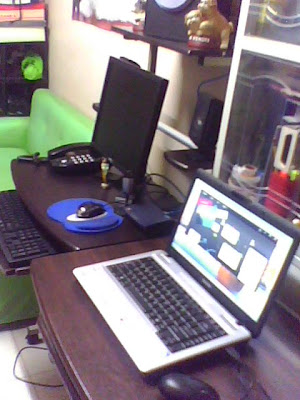 Hayz...there were really very inspiring and relaxing to see! They were truly the fruits of my labor and my hardwork that I should be proud of! Nice! I hope I also inspires you! C",)

Rocky Chua 11:06 PM 1 Comment
As promised, I will share with you the specs and the appearance of my newest Toshiba laptop. Are you ready?! Let's go!

Here is how my Toshiba laptop looks like. Take a quick glance to it: 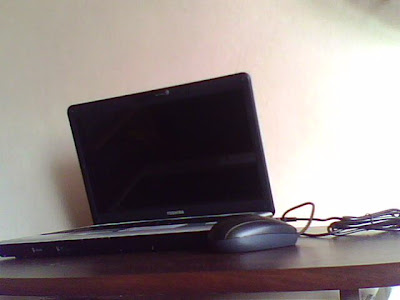 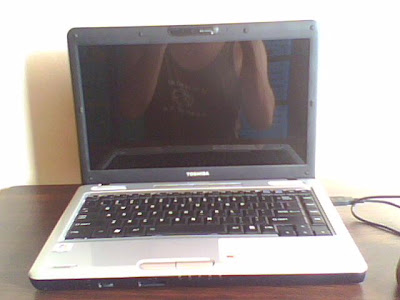 It's Me (So Sexy) While Taking Photos of My New Notebook!
My brand new laptop is a 14" screen Toshiba Notebook with L510 model. It has a gray cover and a black monitor screen. Keyboard is also black but surrounded with glossy silver around.

It has a licensed Windows 7 Operating System (OS) which I can use for a lifetime. But its Microsoft office applications as well as its Norton Ant-Virus is only a trial version limited only for 60 days. After 60 days, I need to bought for its license! 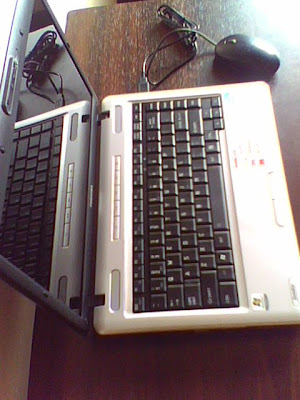 Taking Its Side View! 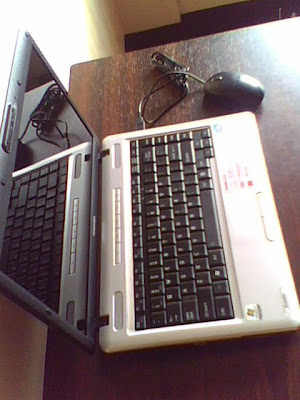 One More Shot!
Talking about its vital specs, it has a 1GB DDR3 memory. Actually, it can be upgraded to 2GB for free. But since there were three items to be given as freebies when I bought this laptop namely a 2GB upgrade, a Samsung e1080 cellphone, and an hp printer, I preferred the Samsung e1080 cellphone rather than the 2GB upgrade or hp printer because my brother needs a cellphone. I gave that cellphone to him. I didn't choose the 2GB upgrade nor the hp printer because right now, I'm satisfy with its speed and I didn't yet need a printer!

It has a hard disk drive capacity of 320 GB. I partitioned its storage to two drives, Drive C and Drive E for securing my stored files and backups.

My new laptop is also a Wi-Fi ready. Yup, whenever you have a wireless router, you can easily connect to internet without having difficulties in configuration! Moreover, it has a Bluetooth application, built-in DVD player/writer and web cam. It already had its Toshiba CD/DVD burning application so that you don't anymore need to install Nero on it! 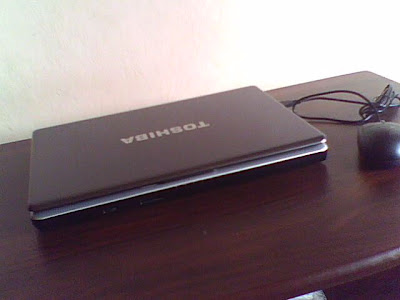 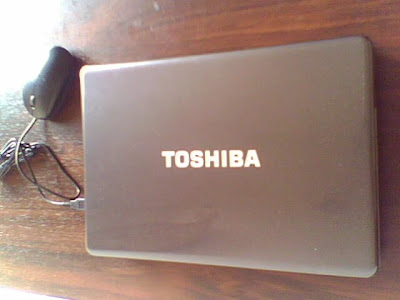 My Trusted Brand!
Since it is already in Windows 7, more applications found on both XP and Vista were applied to it. But of course, there were many more new applications to enjoy with which were only provided by Window 7 OS. Examples were the radar detection, the slide show wallpaper, extra gadgets on its desktop, automatic browser fit, and many more to mention!

Besides the cellphone, it also has a free Genius optical mouse and a convenient laptop bag!

Right now, I just bought a laptop screen protector and a keyboard rubber protector to protect my newly bought laptop. I've ensure that I will give the best form of care to it! =)

I am currently in the 'getting to know you' stage with my new laptop. Yup, "nangingilala pa siya"! But sooner, we will be as closer as possible with it just like my previous PC! 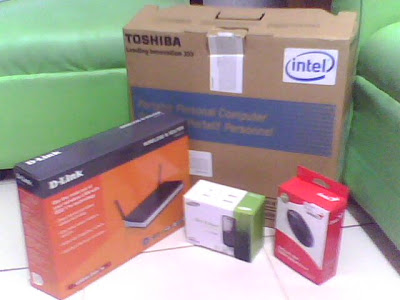 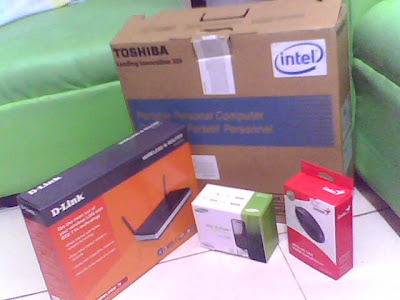 Finally, I alreadey bought my new laptop! In the afternoon of October 24, 2010, me and my mother bought a Toshiba laptop in Landmark Trinoma.

The laptop which I bought is a Toshiba L510 model. Yup, that's the one I presented to you in my previous post. Don't worry 'coz later on, I will also share with you the complete specs of my chosen laptop.

For today, I will show you first the complete package I got when I bought the laptop!

Just like my good friend told me, a Toshiba laptop is good but its expensive! Yeah, he's right. My new laptop is quite expensive. But, I consider the quality rather than the price. After doing many research, I found that Toshshiba is the best quality in terms of notebooks and netbooks. They were already 25 years in the business compared with the other brand! So, will I need saccrifice the quality for a cheaper one?!

Besides considering the quality amidst of high price, there were some freebies included in my laptop. And these were below: 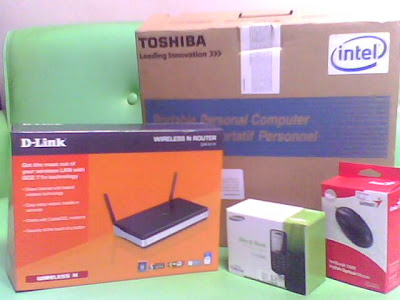 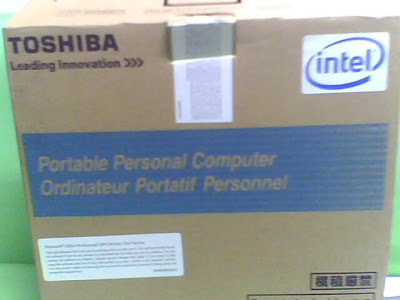 My New Toshiba Laptop Freshly Bought!
A Samsung E1080 cellphone, an optical mouse, and a laptop bag were the free items I got when I bought this laptop. Actually there were three free items to chose from: a Samsung E1080 cellphone, an hp printer, and a 1GB memory upgrade. I chose the Samsung cellphone since my brother needs it! I didn't prefer the hp printer since we didn't need it yet as well as the 1GB memory upgrade since I'm currently satisfy with the speed of this new laptop!

The D-Link Wireless router that you can see is not a free item! Yup, I bought it since I need a wi-fi for this new notebook. After we arrived home, I used my IT and engineering skills in networking to configure the router so that we have an internet connection for both my PC and for my laptop! And it's a big success! Now at the same time, my brother can browse the net and play internet games in my old PC (which is already his) while I'm blogging here in my new laptop! Nice!

Here are the items which come together with my new laptop! Except for the wireless router, all of the said items were free! I enjoy a great quality, at the same time enjoying the free items! Expensive price is not anymore an issue to me! Hehe...!

This my second post featuring my new laptop! On my next post, I will show you how it actually looks like and share with you its specs! So, watch out for this exciting new laptop series! So glad! C",)

The Search for a Laptop! 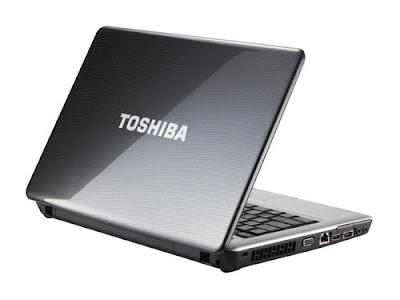 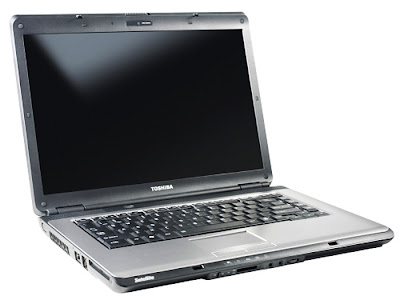 It's final...! I already decided! Tomorrow will be the day! Oh yeah!

After my short search (which is only last month then yesterday), I finally decided what laptop to buy!

Tomorrow, I will buy my new laptop! I will buy a Toshiba laptop with a model of L510. Yup, this is the one you see in the pictures! What can you say?! Do I got my best choice?!

Actually I searched the different gadgets and PC stores to look for the best laptop to buy. ElectroWorld, Silicon Valley, Villman, Complink, Cyberzone, and many more PC stores in Trinoma, SM North Edsa, and SM Valenzuela. And finally, I found the one I'm searching for! 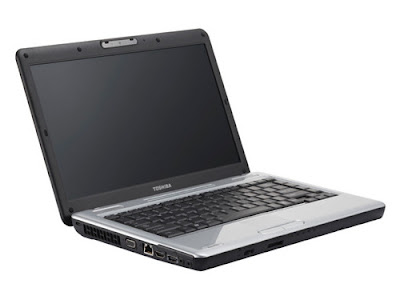 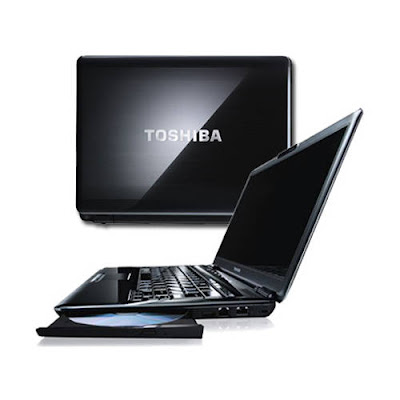 My first plan is to buy a netbook. But after I compared the different specs of a netbook, I wasn't satisfied. Netbook has no DVD writer and the memory is not that large. Though some provides a portable DVD, it's still messy to use when a driver is attached to it. The only advantage I found on it is its light weight, its portable and can use everywhere!

I got many laptop brochures and spec sheets. I compared one brand from the other. Atlast, I chosen the brand whom I think the best among the rest! I hope I got my best choice!

Yes, it's Toshiba L510. It has a 1 GB DDR3 memory but can be upgraded to 2GB. Hard disk drive is 350 GB. It has a built-in web camera and DVD writer. What more, it has a free Samsung cellphone or a printer!

Tomorrow morning, I will go with my mother in one of the prestige store to buy this laptop. Then in my next post, I will share with you my bought laptop!

Then what will I do with my PC?! I will give it to my younger brother. Tomorrow when I already have my own laptop, this PC will be my brother's property! C",)
Older Posts Home
Subscribe to: Posts (Atom)