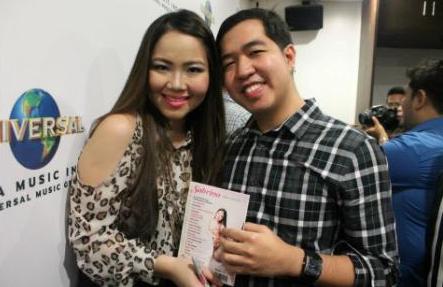 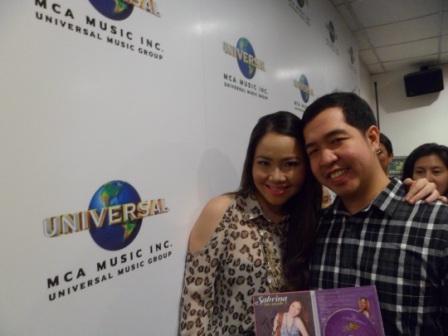 I'm very happy and inspired the night after I attended the blogger's conference of the "Accoustic Princess" Ms. Sabrina Orial. The event didn't only became an ordinary media conference or launching of an album. But indeed, it became an acoustic night as Sabrina serenaded us with her sweet music. What more, she sang me "Saranghae," one of the best songs I love most!

"Saranghae" is actually the official theme song of the 2010 hit Koreanovela of Lee Min Ho called "Perfect Match" which aired on ABS-CBN's Primetime Bida. The original or the Korean version was performed by Younha and is titled as "Can't Believe It".

Last week, all things of the past were reminisced after I met in person the sweet singer of the song. And yes, she sang and dedicated it to me! Here is our short video wherein Sabrina serenaded me with "Saranghae:"


Bravo! Bravo! Bravo! Sabrina is truly the best! Still I can't believe that I already met Sabrina, the singer of "Saranghae!"

Yes, I love the said song 'cause it reminded me of someone way back in 2010. I got a crush to my former teammate which eventually became my friend. We had perfect moments every night since both of us were in a night shift. I wouldn't elaborate more our moments (at baka bigla ako itext nun pag nabasa niya ito, yari!) Let's keep all those good things in the past :)

And here is the fan-made music video of the complete version of Sabrina's Saranghae which also features kilig scenes from the Koreanovela "Perfect Match:"


Right now, Sabrina just launched her fifth album called "I Love Acoustic 5." It contains songs from her very own composition like "Oh Boy, " "Make Believe," and "Terrified"  which features Christian Bautista in the music video. And of course, the album also contains her very own rendition of the different hit songs like "Payphone," "What Makes You Beautiful," "Call Me Maybe," "Starships," "Somebody that I Used to Know," "Domino," "A Thousand Years," and "One Thing."

Thanks much Sabrina! Hope to hear more of Sabrina's songs to be used in the other TV series! God bless and more power! (RCB)

Rocky Chua 1:20 PM Comment
After the domination of Bench billboards of the Maroon 5 front man Adam Levine in Guadalupe, EDSA, another international celebrity is capturing the attention of many commuters via huge billboards. He is no other than the Korean Superstar, Lee Min Ho!

Four huge billboards of the "Boys Over Flower" star were now up and posted in the famous billboard area. Shot in different poses, here are the stylish billboards of Lee Min Ho:

Lee Min Ho is currently in the Philippines to grace his fans in a meet and greet event sponsored by the clothing brand which he endorses.

Lee Min Ho rose in fame in the country after leading in the different Koreanovelas namely "Boys Over Flowers," "Perfect Match," and 'City Hunter." All these TV series were shown in the Kapamilya network and paved way for him to be called as the Asianovela Superstar!

Once more, many thanks to my blogger friend Carl Valenzona for this great photo! (RCB)
Older Posts Home
Subscribe to: Posts (Atom)