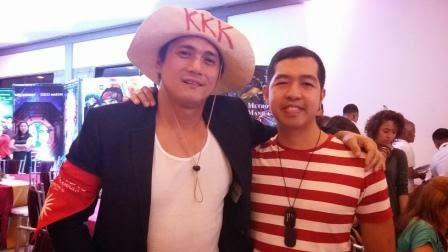 For the second time around, me and Robin Padilla participated in the Metro Manila Film Festival (MMFF).  Last year we were both together for the award-winning "10,000 Hours" and this year for the historical "Bonifacio: Ang Unang Pangulo."


Yours truly got a chance to have an exclusive interview with this Philippine movie idol. We talked about his current movie entry to the 2014 MMFF wherein he played the famous Filipino hero Andres Bonifacio.

In my interview, he revealed interesting  facts about the movie. As per him, the movie is more on entertainment rather than historic. The movie is also made with a modern touch.

Here is the full video of my exclusive interview with Robin together with the people behind the film. Let's watch this:

The movie is really worth watching! Congrats idol Robin Padilla for playing such another remarkable role. Until the next MMFF! (RCB)