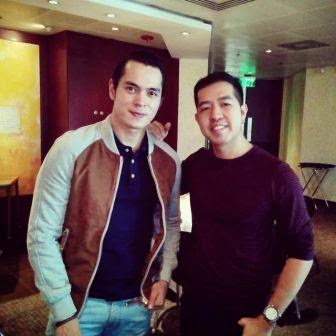 I had an opportunity to interview one-on-one the hot hunk Kapamilya actor Jake Cuenca during his solo presscon in ABS-CBN.

On my exclusive interview with him, he revealed his career plan of pursuing his acting study in New York. Though he already showcased his effective acting in different movies and TV series, Jake still wants to further improve his craft.

Jake is truly one of my favorite bida-kontrabida actors in TV and movies. He can effectively shift from being a well-loved leading man to the most-hated antagonist. Well, he proved this from being the bida George Luis in "Maria Mercedes" to being the main kontrabida Franco in "Ikaw Lamang."

Inline with his varying roles in TV and movie, I've asked Jake in my interview if what is more challenging to him - to play as bida or to portray as kontrabida? And here is our video interview conversation:
Before leaving the country for his sole-expense study abroad, Jake will lead in an episode in "MMK" and will once more show his sexy sizzling body in the upcoming Bench The Naked Truth  Denim and Fashion Show.

Great one Jake! Keep up the good work and nice seeing you again! (RCB)