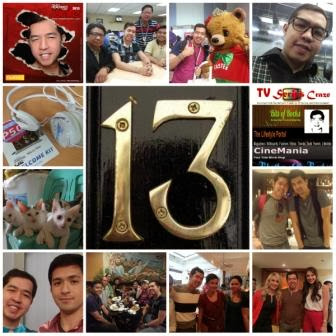 2013 is Over!  But as part of my tradition here in my personal blog Bits of Rocks,  I always share with you my avid readers, viewers, friends, and networks my annual year ender review. Every end of the year, I wrap up the year listing down the top things which highlighted my year!

Most of the beliefs said that 13 is a bad number. It means a bad luck for many. But for me, I didn't treat 13 as an unlucky number. Instead, I treat and set it as a number of lucky charm and success. Therefore, the year 2013 for me both spell a good and not so good year for me in different aspects of life - career, lovelife, socials.

For my 2013 year-end personal report, I counted down the Top 13 things which made my 2013. Like I've said, 2013 both spelled success and failure at the same time. Hence I called it, The Year of "Bitter-Sweet" Moments.


Aside from my regular work in IT and career in blogging and social media, the second quarter of  2013 opened a networking business for me. I became part of the famous vitamin / optimizer networking business. For a month, I was active on the said networking business. But because of my too busy and hectic schedule, I lied low on the business in recruiting people, But, I'm still active in using the products since it's good for the health! At the same time, I'm still a retailer of the said products!


In 2012, I've appeared in various TV programs and commercials from the two rival networks such as in "Maria La Del Barrio," "Dahil Sa Pag-Ibig," "Ina Kapatid Anak," etc. But this year, more TV appearances of yours truly took place. Some of these were "Indio," "Little Champ," TV5's Blogapalooza interview, and a major live TV guesting in two of PTV4's news and editorial programs. One of these was the "Tulong Sa Bayan" hosted by Ms. Kathy San Gabriel discussing the help of blogging for the victims of Yolanda.


The first quarter of 2013 was not a good quarter for me! That was the time when I was pushed into the limits. Imagine, the day itself of my birthday, I was struggling and arguing with my new manager! Too harsh the experience was! But those things kept me stronger and brighter! Thanks for putting me on a better place!


The year 2013 even gave me a new look, a new style in terms of fashion and appearance. Yes, this year, I tried different variations of my hairstyles inline with the latest trends in fashion. My current haircut now is the hit Mohawk! I've tried different variations of it including the one with shave marks. And of course aside from the haircut, I also varied my style in wearing different attires. I've showcased both from formal to rockstar taste of fashion! I even imitated the dress style of Tom Rodriguez and Dennis Trillo from their hit soap.
9.) The Year of the 'First Time:'


My celebrity hobby leveled up for this year! Aside from our local stars, this time, I encountered and mingled more with the foreign celebrities! This year, I met the following international celebrities: Apl.De.Ap; Chris Cayzer; The Chippendales; the Glee Stars Becca Tobin, Melissa Benoist, Jacob Artist, and  Dean Geyer; our very own  Charice; and the legendary 80's singer Patti Austin. I even met again the Thai heartthrob Mario Maurer during the premiere night of his new movie "Pee Mak" but sad to say, I didn't got a chance to have a picture with him! I also met different international models from the different events.

7.)  New Gadgets and Appliances for the Year:


This year, I was able to bought new gadgets and appliances. Some of these were a new Samsung S3 Android phone replacing my qwerty Samsung phone; a new tablet; a new radio component for our sala; and a 20" LED state-of-the art TV for my room. We even bought some other small things for ourselves in addition with.

6.) New Cats and Kittens as the New Member of the Family:


Aside from our big male cat Macmac who started to live with us as a visitor last 2012, this 2013, we adopted more new cats and kittens. It stated with the mother-cat Choleng who gave birth to first three white kittens namely Nini, Nunuy, and Buboy. After months, it gave birth again to another five new kittens. Two of which died. The remaining three plus Nini were given to my friends. Then earlier in December, Choleng once more gave birth to nine new baby kittens, her new babies from Macmac. Some died while we gave the others. Only one of them remained to us, a baby girl tiger-like kitty. All in all, we are taking good care to five cats in our home!

5.) More Active and Dominant in the Social Media:


2013 made me more active in Social Media! Aside from blogging, more new social networks of yours truly opened up! I created my personal Instagram account last September. Then, I opened up my Sound Cloud account where I share my cover versions of the different songs. I even have now my Foursquare account where you can find me in different places. Aside from my personal YouTube Channel, I created another one named Vids of Rock this time containing events, happenings, and other interesting things.  You can also read the comics version of myself via Bitstrips. Of course, I'm still active and kicking in Twitter and Facebook. You can follow me on Twitter and Instagram via my username @rockenroll_04.

This blog, the Bits of Rocks even celebrated its 5TH Year Blog Anniversary last March 2013.


We can say that, "inuulan ako ng events" this year! Yes, more new events and invites were pouring! I got new and different invites from the different PRs ranging from a simple one to a prestige big time happenings! Even though some "insecure" personalities keep on pulling me down, I still got the lucks and blessings! I even managed to surpass them!


This year, I met new friends, I became part of new group, I expanded my networks! I got found friends from the different events I have attended and from my team and workplace itself! I even found new love. I enjoyed new friendships!

Earlier this year, I suffered! But on the mid-part up to the last, I enjoyed and emerged on top! The tragedies I've experienced in this aspect of my career seemed a blessing in disguise. God put me on the better one. He leads me to a brighter path. Now I'm enjoying what I have - the people, the friends, the place, the position, and the range!


And now we are down to my top list, the No. 1 spot in my Top 13! And yes, this part is the hardest one to write! Sorry, but this one really spelled my 2013. It drove me crazy I guest! If in 2012, I got three relationships at the same time (yes as in sabay-sabay), 2013 then served as my karma! This time, not once nor twice, but thrice! Yes, three times I got three different love stories but of one similar plot! Hence they were termed as Season 1, Season 2,  and Season 3. It seems nakiki-uso yata ako sa trend ng love stories ngayon...!!! Earlier in January 2013, my siomai-serye reigned the social media (Season 1). It was eventually replaced by a new one in May 2013, the most silent of the three (Season 2). Until the mid part of the year 'till the present was dominated by the third one (Season 3). Take note, all of them have one letter in common! Can you guest what letter is this?!

But of course, my 2013 didn't only rotate to these three seasons. Last March 2013 before Season 2, I got a one-month long relationship (mala-Cristine at Derek lang ang peg) but didn't prosper to last! The first movie that we had watched was "It Takes a Man and a Woman" therefore that movie specially the theme song spoke something in my heart.

And that concludes the year that was, my Top 13 of 2013! It was really a Bitter-Sweet! In both the love and the career aspects, it combined the sweetness and bitterness! Sorry, I can't disclose any names for privacy and confidentiality purposes! Looking forward, for the best this 2014! Happy New Year to all! (RCB)