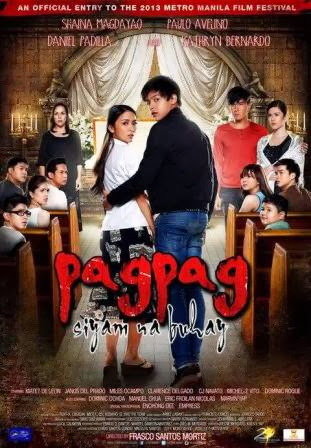 I've just completed watching 4 of the mainstream movie entries in the 39TH Metro Manila Film Festival (MMFF) 2013. These include, "Boy Golden: The Arturo Porcuna Story," "Pagpag: Siyam na Buhay," "My Little Bossings,"  and "Girl Boy Bakla Tomboy." And of course, I even watched one of the new wave movie entries, the action film "Saka Saka." And yes, I will share with you my movie reviews for each of these movies. I already completed the review for "Boy Golden."

Of the said five movies that I have watched for the year, "Pagpag: Siyam na Buhay" is the No. 1 on my list! Aside from the fact that I'm a lover and a big fan of horror movies, there are certain things in the movie which made it as my No. 1 favorite!


First of all, the story is not predictable! There is a twist and mystery in the story that made the audience hook! "Yun bang, aabangan mo ang bawat eksena at hihintayin mo ang susunod na mangyayari!" Although you know that each of them will die, there is still a question in your mind if how the tragedy could be stopped!


Second, this movie really gives you an extreme horror experience! Yes, "sobrang nakakagulat at nakaka-kaba ang mga eksena" specially when they involved the Filipino tradition of "patay" and "lamay."  "Takot pa naman ako sa mga patay at sa mga lamay"  so this movie gave me an nth level of frightening experience! "Umpisa pa lang nakakatakot na"  when the movie started during the wake of the dead Enchong Dee who committed suicide. His girlfriend Empress violated some of the beliefs by wearing red in the wake and not practicing "Pagpag" therefore the ghost of Enchong followed and terrorized her!

Third, I love the twist and the way how they relate the Filipino beliefs and superstitions to the horror story. It was clearly depicted in the movie, "kung ano 'ung nilabag na pamahiin, dun namamatay 'ung lumabag." For instance the character of Miles Ocampo who look at her face on her mirror during the lamay, she died also on the mirror - "nabubog at natusok ng malaki niyang salamin sa kwarto" at the same time, a big chandelier felt on her! Also the character of CJ Navato who stole food, the sandwich on the lamay, he died via 'sandwiched' by two vehicles! Another one,  the character of Michelle Vito who cried on the coffin of the dead, she died by means of water! It is similar to the character of Dom Roque who wiped the tears of Michelle in the coffin therefore he died also in the shower room by means of water and glass!

Check out the full trailer of "Pagpag: Siyam na Buhay" below and see those things that I've mentioned:


Aside from that, the main characters of the story showed a great acting skills! Paulo Avelino's acting here as a ghost killer is superb! He is my bet for the Best Supporting Actor award. And yes, he didn't failed the expectations of audience here in the movie by giving his best in terms of acting! He reminded me of his character as Nathan in "Walang Hanggan!"

Of course, Shaina Magdayao who is playing the wife of Paulo is also great in acting in the movie. She revealed a 'bida-kontrabida' character in the story!

Kathryn Bernardo, the lead actress in the movie who is portraying Leni also didn't left behind! "Di rin nagpatalo sa aktingan ang Teen Queen of Philippine showbiz!"  She can do both drama and horror at the same time! You can really feel her swing of emotions in the movie!

And of course, I love the lead child star Clarence Delgado in the movie! He is playing Macmac, the cute abandoned child and the unknown son of Paulo and Shaina. His ka-cutan and his power to see the next tragedy even though he can't speak captured the hearts of the viewers!

The movie's target audience were teenagers, youngsters, and young at heart that's why the story revolves around the group of teenagers! But of course, they were able to combine the needs and expectations of the older viewers.


And two of the downfalls, the negative sides of this movie was first, they continue the tradition of serial killings with a pattern which reminded us of "Feng Shui," "Sukob,"  and "The Healing."  And second, I can't accept the part of the movie wherein they bring a new life to the dead people. "Nabuhay 'ung patay at bumalik na parang normal na tao lang!"  This is when the characters of Macmac and Paulo, the former dead were given new life and retain as normal people! And what is the connection of the characters of Enchong and Empress who appeared in the first part of the movie to the story of Kathryn, Daniel, Paulo, and Shaina?! It wasn't revealed in the end! These were just some of the improvements of this film but overall, this movie is one of the best!

Once more, congratulations Star Cinema, Paulo Avelino, Kathryn Bernardo, Clarence Delgado, Matet De Leon,  and to all the people behind this film for giving us another remarkable horror movie like this! Two thumbs up "Pagpag: Siyam na Buhay!" It's my No. 1 MMFF movie for 2013! (RCB)