Movie Review: 'My Little Bossings' is More on Drama than Comedy! 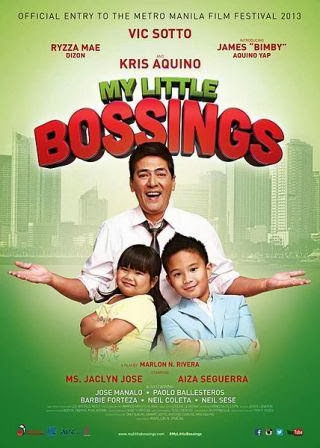 I've watched the film to find out why it conquers the box-office gross though I got bored watching the trailers of the movie shown on TV and on the internet.


The first thing I found out in this movie, it's more on drama than comedy! Say, it is made of 90% drama and 10% comedy. There's a lot of drama scenes of Vic and Aiza on the movie. Even the scenes of Kris and Bimby were mostly drama and teary! The two kids Ryzza and Bimby as well as Vic and his movie sidekicks  Jose Manalo and Paolo Ballesteros handled the comedy part tickling the audience! But still, drama prevailed in the totally of the movie!

The movie is truly a family-oriented! It's perfect not only for the kids but to the whole family as well! It teaches us the importance of the family - your mother, father, and children. It shows how the parents can give everything, can sacrifice even their happiness just for their kids. This part is clearly depicted in the story of Vic and Aiza who is playing the father and daughter with a conflict; of Aiza and Ryzza who is also a mother and daughter in the film with a dark past; and of Kris and Bimby  who were not only mother and son in real life but also in the movie who will solve a threat in their lives.

The story's plot is simple. The focus is really the two kids. Just like Vic said, "walang kidnapan, walang barilan" like we always see in the traditional Pinoy comedy films. It just deals with simple conflict.

Check out the full trailer of the film below:


Well if there's missing in the movie, "kung saan ako nakukulangan," it's definitely in the comedy aspect. Maybe we can categorize this film as a drama rather than a comedy. Or should I say, a drama with a touch of comedy!

The story flow is also indeed smooth. The later part of the movie explains why Vic and Aiza's relationship is rough, why Aiza took care of Ryza, and why Vic cannot hardly accept the dead of his wife!

But the negative aspect of this movie, this is the movie with lots of endorsements! "Para akong nanunood ng isang sine ng TV commercials!" Almost every scene there is a brand promoted! A brand of soap, detergent, pasta, pancit canton, medicine, bakery, tuna, tocino, celphone, and everything in the movie were composed of endorsements! "Buti sana kung ipapakita lang saglit ung pangalan ng brand,"  but they even have dialogues and certain stars acting on it!

Kris Aquino also took a very small part in the movie. Her character seems like a supporting role note that her name and Vic's were emphasized in the billing! Hmm...maybe that's the reason why her picture was not included in the movie poster?!


In terms of acting, I give the credits to Ms. Jacklyn Jose! She can do both villain and comediane character! She reminded me of her character as Dona Charito in GMA-7's teleserye "Mundo Mo'y Akin!" On the other hand, I also commend the acting skills of Aiza in the movie. She's good in drama and "kaya niyang magpa-iyak ng audience!"

And of course, the stars related to Bossing Vic Sotto were also seen in the movie. Some of them were his rumored girlfriend Pauleen Luna; his real-life son Oyo Boy Sotto;  his nephew, the son of Tito Sotto; and his besfriend Joey De Leon!  We will be surprised if we see Wally Bayola in the movie! Hahaha!