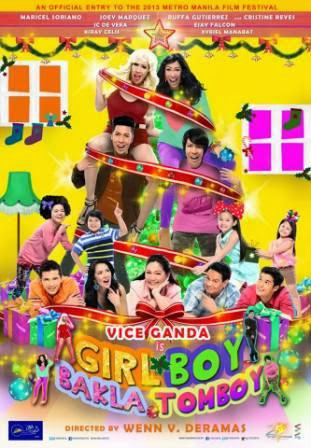 And the fourth 39TH Metro Manila Film  Festival (MMFF) 2013 movie that we watched is no other than the Star Cinema and Vice Ganda's starrer, the comedy film "Boy Girl Bakla Tomboy!"

Well, the reasons why I decided to watch the said movie is first, to see how Vice Ganda portray the four different characters with four genders; second, to see why it was defeated by "My Little Bossings," and third, to compare this movie against his last year's top-grossing "Sisterakas!"


What I love most about this movie is the talent of Vice Ganda to portray four different roles with four different genders! In the movie, Vice's characters were quadruplet! He was able to give life to the girl named Girlie, to the boy Peter, to the gay Mark, and to the tomboy Panying! Even though the four characters were played by only one actor, we can easily distinguish one from another! "Hindi mo masasabing si Vice lang mag-isa ang gumaganap ng isang role!" For me, of the four characters, I love the girl and the tomboy! Yes, "ang galing-galing gumanap ni Vice na girl at tomboy!" "Sa bakla normal lang  kase niya 'un, 'ung boy medyo pilit pa at di ako convinced." But the girl and the tomboy characters, perfect! Vice played them very well!

Yes I admit, I love to watch a movie or TV series with dual or triple roles! That's why I love the teleserye of Claudine Barretto before which was "Saan Ka Man Naroroon" (1999) where she played the triplet Rosario, Rosenda, and Rosemarie; the TV series of Lorna Tolentino before which was "Kaytagal Kang Hinintay" (2002) where she played the twin Lorea and Lorinda; and the Coco Martin's hit action-drama serye "Minsan Lang Kita Iibigin" (2011) where he portrayed the twins Javier and Alexander! "Tamo kabisado ko pa! Hahaha!" And yes, if I was given a chance to play a character in a movie or in a TV series, I want the dual role, the twin where one is bida  and the other is kontrabida like what Coco Martin played in his teleserye!
The movie is also full of fun! You will laugh in every scene of Vice Ganda! Very natural the way he cracked jokes! It seems like you're watching "It's Showtime" and "Gandang Gabi Vice!" The movie has a touch of live comedy!


I also love the theme song of the movie! It's "Whoops Kirri" which is revived by Vice Ganda himself! "Ang kulit lang!"


I also observed that Vice's four characters were inspired by four different celebrities. The girl depicts Ruffa Gutierrez,  the boy is the K-Pop G-Dragon,  the gay definitely is no other than himself, and the tomboy is either Charice or Aiza Seguerra! Agree?!


The story also have a simple plot just like "My Little Bossings." "No kidnappan, no barilan," unlike the traditional Pinoy comedy films we used to grew up with!
It is also family-centered. In a way, we can get moral values in the story - the essence of close family ties! Whatever happens, your family will always be your family! "Kayo-kayo din ang magtutulungan sa huli"  Acceptance ruled!


The negative side of the film, first, some of the casts seemed like 'wall flowers,' useless, no gravity, sayang! Just like the characters of Cristine Reyes, JC De Vera,  and Ejay Falcon. Though we all know that they were already big stars, they look like supporting casts, or better say, "nagmukhang 'in special participation' lang sila sa movie! Lack of significant roles in the movie. What more, the love team of Bobby Andrews  and Angelu De Leon, "nagmukhang pang-display!" They may play better roles in the movie if given a chance! "Sayang ang hit love team 'nung 90's  na hinintay ng mga tao"  for a reunion movie! The worst is, "bakla pa ata 'ung role ni Bobby sa movie di pa na-emphasize ng maayos!" Maybe it's better to see that Bobby and Mark, the gay character of Vice were close friends. "Un bang bestfriend sila, magka-amiga"  since thy both gay! Or should be better if Bobby is the sidekick of the gay Vice to add more impact!

Well if they ironed out those negative sides of the film, maybe "Girl Boy Bakla Tomboy" is No. 1 in the top-grossing race defeating Vic Sottos's "My Little Bossings!" And it will definitely surpass the success of Vice's last year's film "Sisterakas!" What do you think?!

But overall, this movie is 100% fun. It you wan to relax, laugh, and feel stress free, definitely you should watch the movie! The credit is still for Vice for effectively giving us four different characters! Two thumbs up Vice Ganda! "Ang galing mo!" (RCB)