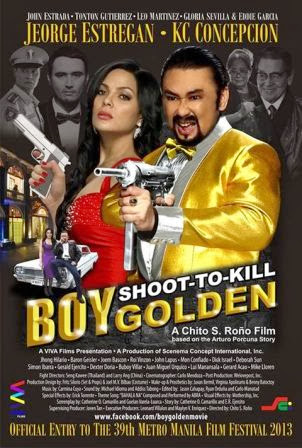 Laguna Governor E.R. Ejercito / Jeorge Estregan made his third movie as an official entry to the Metro Manila Film Festival. After "Asiong Salonga" (2011) and "El Presidente" (2012), here comes "Boy Golden: The Arturo Porcuna Story" (2013). On the said film, he is paired to KC Concepcion.

The movie combines the action, drama, comedy, and even suspense! It has the suspense and tragic aspect when the movie showed the harsh killing of Boy Golden to his enemies, Very brutal, very deadly!

I can say that "Boy Golden" was one of the best movies I've watched during the 39TH MMFF. It uplifted the quality of Philippine movies. Watching the movie seemed like watching a Hollywood action flick! The action was not the typical action scenes we used to watched in the traditional Pinoy action flick. It has the sense of arts and emotion!


In terms of acting, KC Concepcion is truly a revelation! Yes, "sobrang galing ni KC dito!" I was amazed that she can do action and drama at the same time! Her fight scenes were superb! I love the action scene of KC when she fought a lady in the gambling house! The effects and the fight scene seemed like an Asian action film! And "kayang makipagsabayan ni KC rito kay E.R."  knowing the fact that they have an age gap. They fit one another! I wonder why KC didn't won the Best Actress award! She deserves the title! I agree with E.R. together with the other viewers that KC should win the award!

E.R.'s acting on the other hand is also exceptional. Once more, he portrayed another interesting character apart from the previous characters he played on his first two movies. He combined action and humor in the movie! "Ang lakas ng dating ni E.R dito!
Here is the full trailer of "Boy Golden." Let's watch this and see why this movie is one of my bet in the film fest:


I wonder why this movie didn't received any awards except for the Best Float?! Why oh why?! I even bet that this one could also get the Best Picture trophy! But the awards night failed my expectations!

The movie once more relived and revived the action movie in the Philippine cinema industry. "Binuhay nito ang dating genre ng mga aksyon na pelikula na napabayaan na." It can even a best entry to Cannes or any other International movie festivals.

Well, if this movie didn't make it in the MMFF, definitely in the other award-giving bodies, it's a big winner. For me, it's truly a big hit! The story plot is not boring, it's not predictable! The totally of the movie and KC Concepcion's acting were truly commendable! I was not a fan of KC before but after watching this film, I became a big fan admiring her acting skills! "Talagang napahanga at napa-wow niya ako!"

Truly, this film  is a two thumbs up! Another great job for E.R. Ejercito for bringing another good film in the movie festival! Looking for more this year and in the coming years! (RCB)