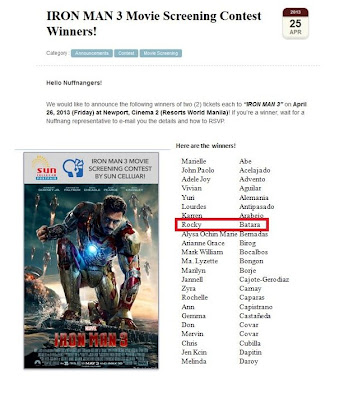 I won another new movie screening! This time, it's for the Marvel box-office flick "Iron Man 3."

And yes, I was able to watch it together with my friend in New Port Cinema 2 in Resorts World, the same venue where we watched last year's "Twilight Saga: Breaking Dawn."

The third series of this superhero movie is the best among its previous two versions. It's more hi-tech and more breath-taking!

I wouldn't talk too much about this movie for the meantime since many requested to avoid spoiler. But definitely, you will enjoy this film the way we did! And I proved why it was hailed as this year's first-day highest grossing foreign film.

Here are two of the film's trailers:

Aside from this blockbuster hit movie, I have more new film line-up to watch out on theaters in the coming days! Hope I can watch them all! :)

"Iron Man" truly rocks the world! Two thumbs up for this movie! (RCB)