For the first time, I met the ageless actor and one of the most favorite senate person, Sen. Ramon Bong Revilla Jr. on the red carpet advanced screening of the newest Telebabad teleserye. Sen. Bong is playing the lead star in the newest GMA-7 epic-serye offering, "Indio."
"Indio" is actually the very first teleserye of Sen. Bong. And it was really a great pleasure for him to lead in this most expensive TV series of the Kapuso network. In the series, he is playing Malaya, the heir of a diwata and an indigenous Filipino. He is gifted with a supernatural power that will save his race from the cruel Spanish conquerors! 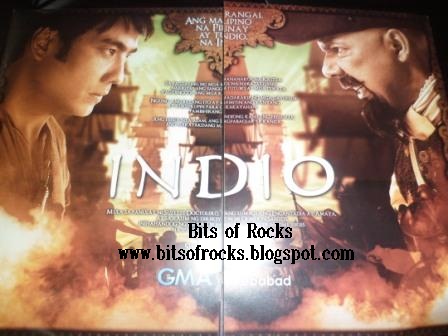 I got a chance not only to meet in person and to have a picture-taking with the senator, but I was able to talk and interview him!


Sen. Bong described his character in the TV series. He even stated the things that we should watch out in the coming days. We even defined the series as a movie made for TV.


Here is my short video clip interviewing the senator. Let's all watch this:


"Indio" showcased the richness of the Philippine culture. It even cited some of the most important events in the history. Watching the TV series, you will truly appreciate Philippine history, one of my favorite subjects in high school which put me in stardom being the consistent "Best in Social Studies" student.

Aside from an epic-serye with a touch of Philippine History, "Indio" also exposes the audience to the magic of a modern high technology. Yes, "Indio" is indeed the new "Encantadia," the most successful fantaserye on Philippine TV.

In person, Sen. Bong is really very approachable and friendly. He always smile. With our similar eyes and smiles, we truly look like a father and son! Some even commented in our Facebook photo saying, "parang mag-utol lang!"