Angeline Quinto Shares the Challenges of her Character in 'Kahit Konting Pagtingin!' 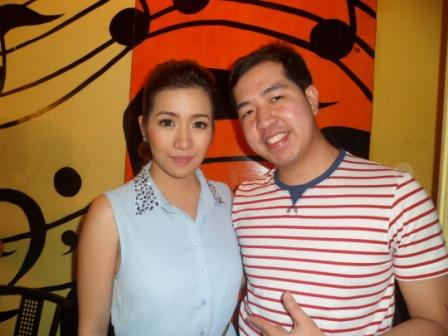 After talking with her leading men Sam Milby and Paulo Avelino, the camera now rolls to the leading lady Ms. Angeline Quinto. Just like Sam and Paulo, we talked about her character in the teleserye.

Angeline is playing the character of Aurora. She is a bus conductress who is determined to do everything for her family and to reach her goal.

Unlike in real life, Angeline is not singing in the TV series. But her loud voice will be heard in the bus being a lady conductor. But comparing Angeline and Aurora, they have their commonalities. "Pareho po kami ni Aurora na nangarap at patuloy na tinutupad ang aming mga pangarap," Angeline shared. Both of them were working hard to achieve their dreams.

Here is a video of my short interview with Angeline Quinto revealing her character in the story:


This is actually my third meetup with Angeline after her first movie "Born to Love You" with Coco Martin and after her performance in an awards night.

When members of the press asked Angeline if how she got these blessings, she said: "Nakukuha po 'yan sa dasal. Ipinagdasal ko pong lahat ito, lahat ng mga biyayang natatanggap ko." It's such a very inspiring story!

Catch Angeline Quinto with Sam Milby and Paulo Avelino in "Kahit Konting Pagtingin" which will premiere this Monday, January 28, 2013 before "TV Patrol" in ABS-CBN's undisputed Primetime Bida! We are really excited to see Angeline in her first teleserye ever! Two thumbs up Angge! (RCB)