Rocky and Piolo Pascual Caught in the Video! 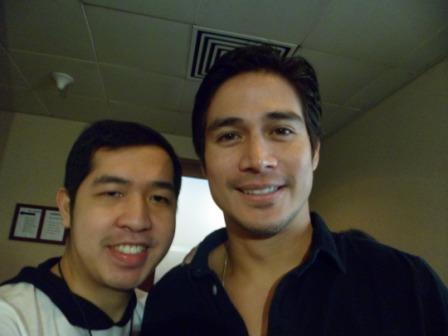 Piolo Pascual and I once more met for the fourth time now. And this is for his newest Star Cinema movie, "24/7 in Love." From the blogcon up to the actual screening of the movie, I'm with the country's so-called Ultimate Heartthrob!

Piolo's character in the movie is very different from the characters he portrayed before. Here, he played the role of Pipoy, a 35-year old man with a mind of a 7-year old child.

His role in the movie is very challenging. He will be in a love triangle with two child stars Zaijan Jaranilla and Xyriel Ann Manabat.

Here is our video with Piolo promoting the movie "24/7 in Love:"


Piolo for the meantime moves away from his hunky and gorgeous character here in this movie. But still, he showed his great acting stint for this another challenging role.

According to Ms. Mae Cruz, one of the movie directors, they gave this kind of character to PJ to show his other side. "Graduate na kase si PJ sa pagpapakilig, sa mga heavy dramas, or sa pagpapa-sexy. This role is something different," direk Mae shared.

This is actually Piolo's second time to play a mentally retarded person. We may recall that he already played before the character of a professor having a mental disability in the longest-running drama anthology in Asia, "Maalaala Mo Kaya (MMK)." But here in the movie, he is portraying a 7-year old child!

Great job Papa P! You once more proved that you are country's one of the best actors of all ages! Two thumbs up! (RCB)