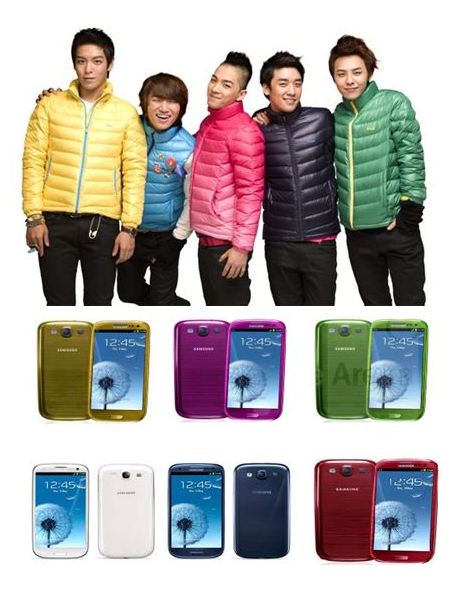 Big Bang is taking the country by storm! As their band name suggests, they already created a 'bang' in the music scene specially in the world of K-Pop! Well, who among you didn't know the K-Pop smash hits like "We Belong Together," "La La La," and "Blue?" Yeah, these were some of the hits popularized by the group which created great impact in the modern hi-tech music!

The group Big Bang is actually one of the most successful Asian acts in the world. G-Dragon, T.O.P, Taeyang, Daesung and Seungri are the five Korean guys who comprise the group.

The group is actually analogous to the newly launched Samsung Galaxy SIII. Just like the Galaxy SIII which is composed of six different colors, Big Bang is also composed of five hot members.

It's interesting to note that each member corresponds to each color of the Galaxy SIII. Each color truly depicts each member's personality!

G-Dragon or Kwon Ji-yong fits the color Galaxy SIII Green. It's because green symbolizes nature, the dominant color on earth which lead everybody's path. As we all know, G-Dragon is the leader of the group which also directed each member of the team. And just like green which is relaxing and refreshing to the eyes, G-Dragon's talent and appearance relaxes the mood of the viewers!


T.O.P. or Choi Seung-hyun fits the color of Galaxy SIII yellow. T.O.P. is better known as the lead rapper of the group who already seen talents in acting in the different films and dramas like  "I Am Sam," "Iris," "Nineteen" and "71: Into the Fire." In short, he is dubbed as the 'entertainer' of the group! He fits yellow because yellow comes in different variations like gold, pale, glow and can easily blend in other colors to form yellow-orange, yellow-green, etc. These characteristics of yellow symbolize the multi-talent characteristics of T.O.P. 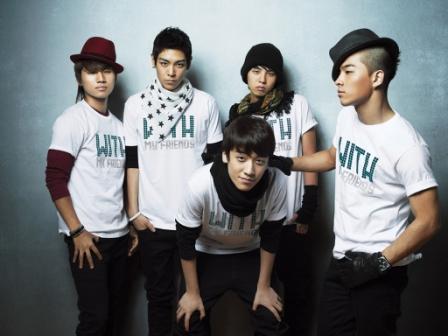 Taeyang or Dong Young-bae better fits the color of Galaxy SIII pink or purple! Of the five members of the group, Taeyang is the hunkiest! He got the sexiest body among the other members of the group. His physical appearance truly depicts a tough guy! He has a baby-face look depicting a young angel. Pink or purple fits him much since pink is a light color which always connotes a baby. And as they always say, a tough guy wears pink! His toughness and hotness then spells pink!

Meanwhile, Daesung or Kang Dae-sung reflects the color of Galaxy SIII red. As we all know, red symbolizes braveness and love. Daesung for me is the bravest member of the team because at the young age, he took the courage decision of dropping out of school to focus on his activities in the team. But the group didn't served as a hindrance to his studies. Eventually, he passed his college entrance exams in 2008 and got admitted into Kyunghee University in Seoul. His braveness then makes him well-loved by many!

Last but not the least is the member Seungri or Lee Seung-hyun. Seungri really fits the color of Galaxy SIII black. Black symbolizes an abstract, a movement or dynamic! Of all the members of the team, Seungri is best known for his dancing skills! Before, he was eliminated in a boyband because although he was noticeable for his dancing skills, he lacks vocal skills. Until later on, he improved this aspect to become one of a dynamic member of the team Big Bang!

Color is truly a part of everyone's life. Just like them, we also have our own color which depicts our personality. In my case, my personality better fits the color of red because I'm a courageous and a hopelessly romantic person! It's nice to know the characteristics and stories of each member via the Galaxy SIII colors! Cool!

If I will to ask you now to choose among the members of the team, who will you bet for? The Green Leader G-Dragon, the Multi-Talented Well-Blended Yellow T.O.P., the Tough Hunky Angelic Pink Taeyang, the Brave Lovable Red Daesung, or the Dynamic Dancer Black Seungri?! Well, it's your choice! Get ready to see them live in the country later on via Samsung Galaxy SIII Bigbang Alive Tour! So exciting...! c",) 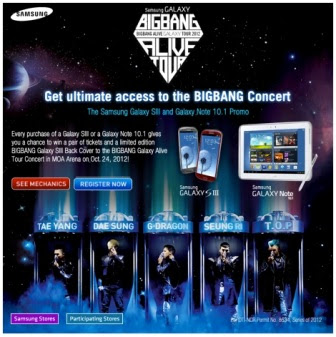