Well being a Bench endorser, expect for billboards around EDSA! Four billboards of Adam were now up and erected in EDSA Guadalupe, the place where the controversial billboards of the Philippine Volcanoes Rugby Team posted one year ago. But unlike the players, Adam's billboards were all wholesome showing no skin at all!

Here is a picture featuring the EDSA billboards of the hunk Adam Levine: 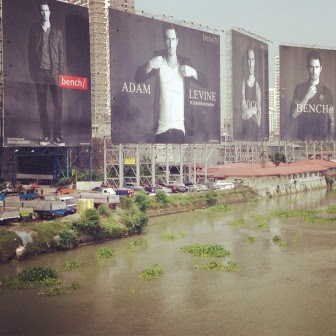 Adam and his band Maroon 5 popularized the hit songs "Moves Like a Jagger," "She Will Be Love," "Won't Go Home Without You," "Never Gonna Leave This Bed," and "Payphone!"

Adam visited the country last month for Bench and for a concert together with his band.

This photo is courtesy of Carl Valenzona. Thanks! c",)