The History of the Black Nazarene! 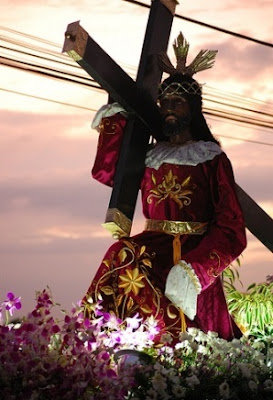 Today is January 9. And this day is another special event in the Filipino culture. We are once more celebrating the Feast of the Black Nazarene. And right now, million people and devotees are there in the Quaipo Church in Manila!

But did you actually know how the Black Nazarene started?! Why do million people gather in its church every year?! What is the story behind this said miraculous black statue of Jesus?!

As part of my tribute to the Feast of the Black Nazarene, allow me to share the story behind this holy image.

Wikipedia defines the Black Nazarene as a life-sized, dark-coloured, wooden sculpture of Jesus Christ, believed to be miraculous by many Filipino devotees. It was known in three culture - in Spanish as "Nuestro Padre Jesús Nazareno"; in English as "Our Father Jesus Nazarene"; and in Filipino as "Mahal na Itim na Nazareno." 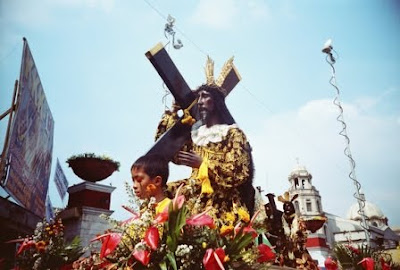 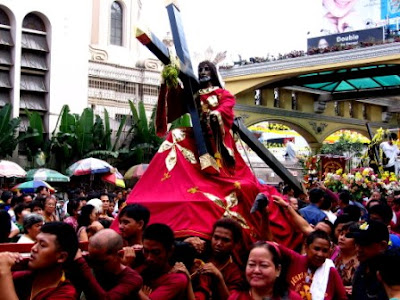 Originally, the statue is said to have a fair or light complexion. It turned dark after it was exposed to fire on its arrival from Mexico!

According to the story, the statue's original carver is an anonymous Mexican carpenter, and the image arrived in the Islands via galleon from Acapulco, Mexico. Folk tradition attributes the colour of the Black Nazarene to a fire on the ship carrying it, charring the image from its original fair tone into its present dark complexion.

There were two identical images of Black Nazarene brought into Manila. The first and most famous one was kept at the Church of Saint Nicholas de Tolentino in Bagumbayan and later transferred to Intramuros when the old edifice was demolished. This Black Nazarene was part of the celebrated Palm Sunday Procession in the old walled city where the statue perished during the Battle of Manila in February 1945. The other statue was given by the Recollect Priests to the Church of Quiapo. It has been often mistaken that this is identical to the lost image of the Intramuros.

Every 9TH day January, Devotees flock to the Basilica for the annual Feast of the Black Nazarene. The procession takes several hours to navigate the narrow streets of Quiapo. On ordinary times of the year, Friday is known as Quiapo Day.

To protect the centuries old image from effects of processions, the priests of Quiapo decided to commission a replica of the Black Nazarene. As a result, the Head and the Hands were placed on the new body while the old torso holds a new head. Both images are brought out for processions albeit alternating every other year.

The statue is currently enshrined in the Minor Basilica of the Black Nazarene in Quiapo, Manila, Philippines. Details were courtesy of Wikipedia!

Now we all know how this miraculaous black statue of Jesus Christ started and why it was called as such! c",)

Wow! Thank you! I constantly wanted to write on my blog something like that. Can I implement a part of your post to my website?
Fermodyl (6 x 3 Pack) Special Extra Vials (Color & Bleached)