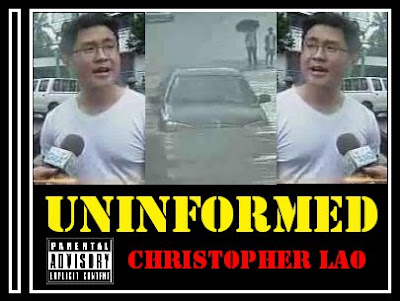 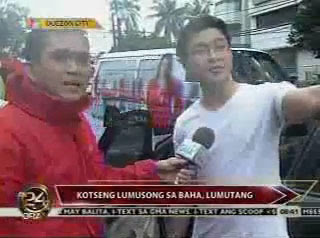 Christopher Lao's name is very famous nowadays! He's already a trending topic on Twitter because of his “floating car” video. He is also the topic of many blogs and a Facebook Fan Page called “Christopher Lao (ang bobong sinugod ang kotse sa baha)” already created for him and got 40,000 plus likes now!

The video of his segment in "24 Oras" was uploaded in YouTube. The incident was caught on camera by GMA-7 reporter Jun Veneracion. The man driving the said car was Christopher Lao, a UP College of Law student, who braced his car to the deep flood waters in Quezon City.

Here is the said video which already became viral! Let's watch this:

Aside from the said video, Lao's statements also become a punchline. Here are those words from Lao which are now huge hits:
“MMDA should have blocked the road, who would tell me?”

“I should have been informed”.

“Bakit ako, Di ba!”
Meanwhile after the spread of the video and the bullying of Lao in the internet, GMA-7 immediately released a statement pertaining the net bullying. They aired it in another segment of "24 Oras." Here is the statement of GMA-7:

From this said incident, hope that we all learned a lesson instead of throwing laughter and fun against Christopher Lao.