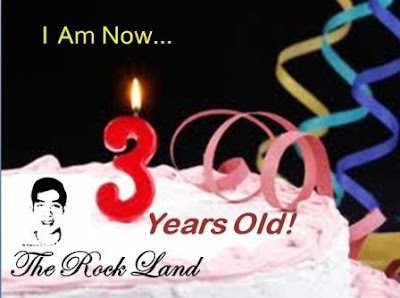 Since it's a sequel of my former Friendster blog, I changed the title of it to "Bits of Rocks II". Until in 2009, "Bits of Rocks" was renamed to "The Rock Land"!

Well, that is the reason why the URL of this blog site is www.bitsofrocks.blogspot.com since its original name is "Bits of Rocks". And from this blog site, other more Rocky's blogs were born!

My very first post in this blog is my poem "Rocky" which was published in our literary folio way back in college. This is the poem which I wrote pertaining to myself but very religious and teaches lessons in life!

After the poem "Rocky", other more interesting posts followed. 2008 is the birth year of this site but it became very active in 2009 until now.

For three years of existence, The Rock Land created different remarkable posts. Some of the well-loved top-rating posts in this site were "Miming Negro" series, "Invasion of our House" series, "Christmas Parties", "Accomplishment Reports" (special last 2010 which created intrigues in our office), and "My Look-Alike" series.
And for three years now, The Rock Land rankings were going higher and higher! Nice! Many thanks to my avid viewers!

So, let's celebrate the third year anniversary of the one and only, The Rock Land! c",)
hApPy YiPpiE 3rD yEaR bIrThDaY!!!