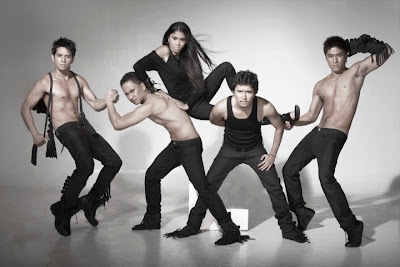 Yup, there were the successful Big 5 of the recently concluded "Pinoy Big Brother Double-Up edition. The hottest and the record-breaking season of PBB!

I know you still remember Johan Santos, Tibo, Paul Jake Castillo, Jason Francisco, and Melissa Cantiveros 'cause they were now one of the big thing on TV and on the entertainment industry!

Well, after dominating our TV screens, look at them now. They dominate even the fashion and billboard world! They really dominate the road and the eyes of the passers. Yup, people passing through EDSA were really magnetized by them!

Aside from the four hottest boys, the only girl in the group who is Melai caught the attention of the crowd. They couldn't believe that Melai now turned to be a beautiful lady! Before, we were thinking of the projects that were allotted for Melason (Jason and Melai) love team as well as the Big 5 member. But now, we can't count their projects since they were too many to handle!

Yeah, everybody truly loves this big billboard. This only proves that all of us, even though impossible at first could reach for our own stars! Good job housemates! Keep this coming...! We want more, more, more...!!! C",)

hope all is well, have a great weekend!