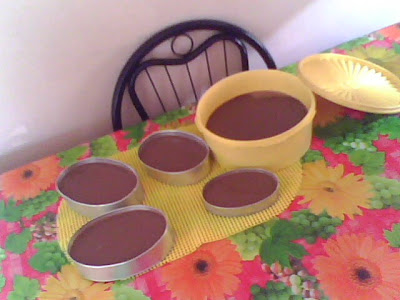 Last Sunday, I've tried another recipe! Just like I did before, I made my own but this time it was a dessert!

I know all of you were really familiar with gelatin! Yup, this is the soft-bar gelatin which is boiled in hot water to melt then afterward will be cooled until it solidifies and eventually form as a gelatin. This is usually serve during holidays. And take note, this is my favorite!

So, to make a difference, I experimented a new flavor of it! 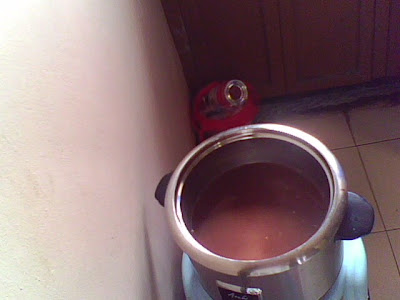 Setting Aside the Boiled Mixture to Cool 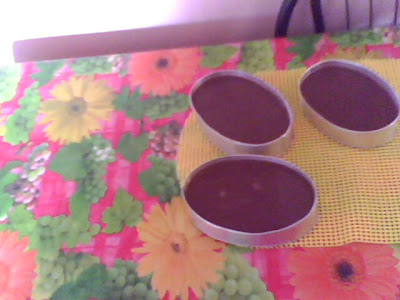 Serving the Mixture...
Usually this gelatin comes in buko pandan, white, or in a variety of colored flavors. But this time, I tried experimenting a new flavor...a chocolate one!

How this differs from the usual one? How did I make it?!

First, the great difference with this was that it was my own made! A rocky inspired recipe! Yeah, I just made an experiment to cook and serve a gelatin in a chocolate flavor! But take note, the gelatin that I have used was the ordinary white one. I just added other ingredients to make it a chocolate flavor!

What are the ingredients? Of course the ordinary white bar gelatin to be boiled in hot water, an evaporated milk (my first plan was to use a fresh UHT milk, but since my brother drank the fresh milk, I have left nothing but to use the evaporated one!), white sugar, and the powder chocolate (similar to the Hershey's Brand Choco/Cocoa usually served in the different food chains). Now that my ingredients were complete, I started creating the recipe! 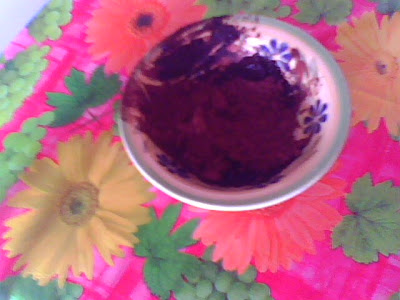 This is the Chocolate Powder I have Used! 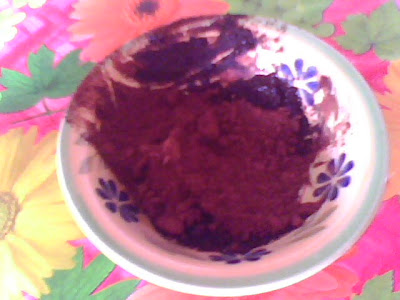 So dark, yummy, and chocolaty!
Here how I made it:

First, boiled the bar gelatin in hot water. When it was totally dissolved, mix the powder chocolate with it and wait 'till the powder choco dissolved in it. Make sure it was totally blended with the hot boiling gelatin. You will see like a hot boiling chocolate drink! Afterward, pour the evaporate milk with the mixture. The former dark boiling chocolate will now turning into a lighter chocolate! Then add table spoons of sugar! Wait for a couple of minutes then when the mixture was totally boiling, turn-off now your stove to start the cooling process!

Now, remove your mixture from the stove and set it aside to cool. Then pour now the mixture into different gelatin plates. When the mixture was distributed into their appropriate plates, allow them to be totally cooled! When they were cooled, store them now in your refrigerator! That's it! There were now ready to serve and eat!

So easy right! But how does it taste?!

The look and appearance was like a hot chocolate drinks serve in the different food chains solidified into a gelatin. But in my recipe, the taste of milk and chocolate will be tasted since lots of milk were poured to a mixture of dark chocolate! Imagine the taste of Hershey's Kisses chocolate, it taste like that!!! Terrific! I made another recipe of my own!

My mother and brother truly enjoyed my new recipe! They loved it and asked for more! Since my recipe became successful, I promised to them to made another one! But next time, I will now use my original plan of mixing it with the Fresh UHT milk instead of the evaporated!

How about you...do you want to taste my dessert?! Well, next time when you visit here in our home, I will serve it to you! c",)

Nice chef Rocky. Another great craft from your kitchen. hehehe!