One Formal Day For The Boys! 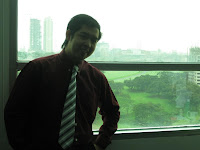 Yup, we all agreed with that. All the boys in our team decided that we will come up a day wherein all of us will wear a formal attire! We will be having a JS Prom costume!

It just recently happened Monday two weeks ago before the start of our new project. Since that whole day will be all allotted for meetings, project walthrough, and wrap-ups, all the boys agreed that we will going to wear a formal business attire! But take note, it's for the boys only! Girls didn't know about it that's why they got surprised when we seen us wearing very formal while they were wearing casual dress! 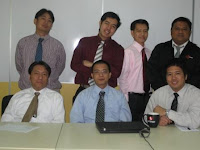 Who's The Cutest Among The Boys? 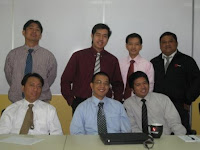 Who's Your Bet For A Perfect Date?

Look at the result! See the come-up! How do we look? Do we look fairer, cuter, and more handsome? But of course, among the boys in our group, I'm still the cutest! I still come up the most handsome in the team!

The girls in our team get jealous and insecure. They say why only the boys? They also wanted to wear a formal dress in that day so all of us were compatible! According to them, they just look like our maids! Hehehe...! 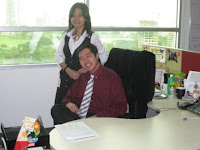 The Manager and His Secretary 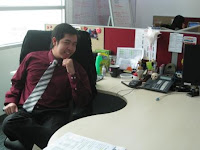 And we didn't missed the chance for pictorials and pictures! Thanks that one of our teammates brought his digital camera. We had a fun of picture taking all-round the office!

I didn't missed the chance to have a picture in my boss' area! It smoothly blends with my attire. According to them, I looked like our new manager in our team...hehehe!

Well, how do we look specially the cutest boy in the team?! Do you agree? That day seems like a special one. It looks like we were attending a formal dinner party. Some says, we're like a sales agent. Others thought we're having a final interview with the other companies! Hahaha...! But whatever they say, feel, or though, I'm so proud that the most handsome and the cutest boy in our team emerged in my own personality! Ahahaha...I know you very much agreed!!! c",)