'Rhythm of the Rock' Pays Tribute to Michael Jackson

We couldn't deny that Michael Jackson really becomes part of our life. He trully touched the heart of everyone. Up to now, all the people worlwide is in the state of shocked for his sudden death.

Personally speaking, I was not really a fanatic or a die-heart fans of Michael Jackson. But, admit it or not, Jacko's songs became part of my life. My childhood days could be best remember hearing the songs from Jackson. Specially my childhood christmas, it was best celebrated with the christmas songs from Michael! 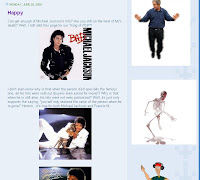 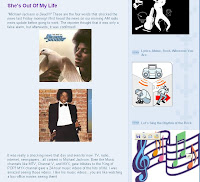 Being also a music lover, I dedicate my three posts to Jacko. Well, if you visit my music and lyrics blog, "Rhythm of the Rock" the latest post is for Michael Jackson.

I featured three songs of Michael Jackson there. "Happy", "She's Out of My LIfe", and the latest, "Man in the Mirror". I choose these three because these three hits have a corresponding counterparts. Yup, these songs were revived by three known persons in our generation today. They were Josh Groban, Sam Concepcion, and Kris Allen.

"She's Out Of My Life" is a memorable song for me. It was the theme of my lovelife way back 2004 when my love goes to a far away place outside our country to look for a better job. Well, to know the whole story, just visit the Rhythm Of The Rock!

I want also to feature the song that sounds like this..."show me the way to your heart...!", but then, I wasn't able to search it under Michael Jackson's list of songs. I don't know if he is the one who made that song or just I didn't know exactly the title of that song so that I couldn't able to find it! Yup, that song was also a themesong of my lovelife way back late 2006 and summer of 2007 in my first job!

Well, what good is that, I am able to feature our 'King of POP' as well as the persons who revived his hits. At the same time, it reflects some of my love stories! So, see you there! C",)

Personally speaking, I was not really a fanatic or a die-heart fans of Michael Jackson.